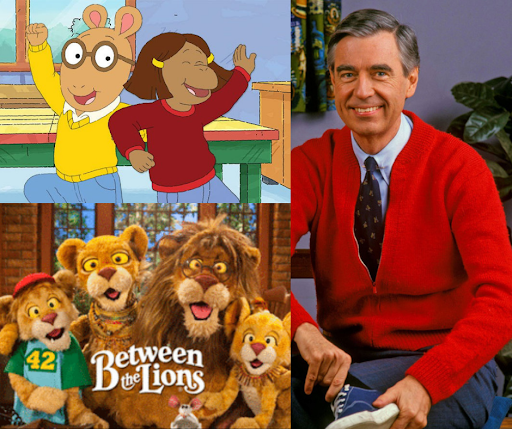 Throwback Educational Shows Kids (and Their Parents) will Love

Nostalgia might make us a little biased, but kids’ educational programming from the 80s and 90s was incredible. The influx of positive messaging from shows like Mister Rogers’ Neighborhood, Blues Clues and Arthur have carried over into modern shows. Those messages, coupled with harsher advertising restrictions during children’s programming, meant that kids’ TV wasn’t a walking advertisement for a new toy or video game. It was meaningful, educational, and fun.

If you’re looking for a new show for your kid to watch, try one that you used to love as a child! Here are some of our favorite “throwback” educational shows for your child to try:

“Sunny days, sweeping the cloooouds away!” For over 50 years, that song beckoned generations of children to sit down in front of their TVs and get transported to Sesame Street. The show brought together kids, adults, and muppets of all different skin colors, backgrounds, and languages together into an imaginative place where everyone mattered. Sesame Street has also had numerous spin off shows, including HBO Max’s current “Late Night with Elmo” show.

Blue’s Clues has done something most late-night talk shows struggle to do: thrive after going through three different hosts. The story of Blue the Dog and her friends has kept young viewers engaged since 1996. After a hiatus in 2006, Blue’s Clues reemerged as Blue’s Clues & You! in 2019, delighting both children and their parents who likely grew up with Steve and Blue. Blue’s Clues encourages problem solving and empathetic thinking with catchy tunes and truly compassionate hosts.

Fred Rogers didn’t set out to reinvent children’s programming; he just wanted to create a show where children felt heard. With a soothing voice and eclectic supporting cast of puppets, Mister Rogers’s Neighborhood is still a far cry from the action-packed cartoons on today’s shows. There’s something incredible about how long this show’s messages have endured. The show’s slow pace teaches patience, empathy, and reflection — all messages that remain equally relevant today — despite its sometimes difficult subject matter.

If you loved books, you likely loved Between the Lions. This 10-season PBS puppet show featured a family of lions who operated a public library. The show’s programming was designed to encourage and promote literacy, often using different animation styles and puppeteering techniques to explore well-known folktales, ancient myths, and fables.

If your child is an animal lover, introduce them to PBS’s fun and fanciful Zoboomafoo! But be careful: they might ask you for a pet lemur or two! Zoboomafoo was created and hosted by Chris and Martin Kratt, zoologists and educators who wanted to combine their passions in a way kids would love. The Kratt Brothers have since gone on to create the animated show The Wild Kratts, but if your child loves looking at real animals or live-action television, Zoboomafoo might be worth a try.

This Canadian television series saw a bit of a spike in popularity thanks to TikTok and the internet. A clown named Loonette and her doll Molly solve everyday problems with comedic flair. Each episode of Big Comfy Couch starts with an exercise routine called the Clock Rug Stretch, inviting children to stay physical while watching television. There’s also the “world’s fastest clean-up routine” called the Ten Second Tidy — a 10-second timer where Loonette would run around putting up all the day’s toys. The tidy encouraged kids to help Loonette clean by also cleaning up their spaces in real-time.

Legends of the Hidden Temple

We’re not really sure when the golden era of children’s game shows ended, but we were sad when it did! While there were a lot of fun game shows we could’ve put on this list, none of them were as iconic (or as educational) as Legends of the Hidden Temple. Players competed in pairs to conquer different physical and trivia challenges.

This animated show is about an anthropomorphic aardvark (no, he’s not a bear) named Arthur and his family and friends. While the show was aimed for children ages 4-8, it addressed issues like asthma, dyslexia, cancer, death and autism spectrum disorder. Clips of Arthur have lived on thanks to social media and the show’s very memeable moments. However, it’s definitely worth revisiting with your child.

Screen time matters for young children, so it’s important to make the most of the time they do spend in front of the TV. Dip your toes into some nostalgia and introduce your children into iconic educational programming. At Lake Forrest Prep, one of Orlando’s leading private schools, we encourage students to pursue learning in and out of the classroom. To learn more about what Lake Forrest can do for your child, give us a call at 407-331-5144 or schedule a time to tour.